North Carolina Highway 12, the paved road leading from Ocracoke village to Hatteras Inlet, was not completed until 1957. Prior to that time automobiles traveled back and forth on the hard-packed beach at low tide. When the tide was high it might be possible to drive on a rutted, soft sand track down the center of the island, but generally only four-wheel drive vehicles could negotiate that trail.

The coming of the highway changed much. This is what Carl Goerch wrote in his 1950's book, Ocracoke:

"Until recently, the automobile owners of Ocracoke didn't have to buy any state license plates because there were no state-controlled roads on the island. Now, however, with the coming of a new state highway from the northern tip of the island to the village, everybody has to purchase a state tag." 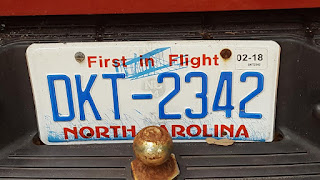 This month's Ocracoke Newsletter is a recording of Rex O'Neal telling about the time he fell overboard when he was gigging for flounder. The story was recorded for Coastal Voices, an oral history project about the maritime heritage of the Outer Banks and Down East region of coastal North Carolina. Click here to listen to Rex telling his story: https://carolinacoastalvoices.wordpress.com/2014/06/17/rex-oneal-gigging-flounders-2/.
Posted by Philip at 5:40 AM