Cecil Bragg, in his book, Ocracoke Island: Pearl of the Outer Banks, writes about "Progueing for a living." He says, "It seems that word isn't used except on the Outer Banks. Fishing, clamming, crabbing, oystering and shrimping are called progueing... To catch clams [in years gone by] one used a farm rake with the teeth bent in a bow-shape so it would push easier in the seaweed growth and one could feel the rake hit a clam and they would dig [it] up and put it in a wooden water-tight box which we drug behind us with a rope tied around our waists."

Nowadays we progue for clams using rakes with tines fashioned from stainless steel table knives, and with metal or plastic baskets equipped with a flotation device. Other than that, the procedure is the same as it was done many years ago. 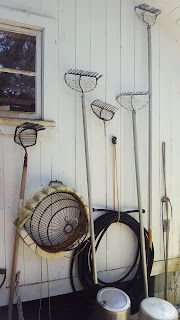 This is what I wrote about progueing several years ago: Old time O'cockers could often be found progueing for a living. They'd progue for fish, clams, oysters, crabs, even turtles. Sometimes they'd use a gig (for flounder), a rake (for clams), or tongs (for oysters). Turtle progues were also used on the island.

Progue is a variation of an obsolete term "prog" (going back at least to 16th century England & Scotland), meaning to search, prowl about, or forage for food or plunder. On Ocracoke it can be used to mean searching for seafood, or more generally for just poking about or jabbing at something (e.g. "Will you quick proguing around in that pile of trash!").

Our latest Ocracoke Newsletter is the story of the Aleta, Ocracoke's mailboat from 1944-1952, compliments of the Core Sound Museum. Click on the following link for photos, text, and audio recordings about this iconic vessel: http://www.coresound.com/saltwaterconnections/portlight/aleta/
Posted by Philip at 6:00 AM