Last month a reader left this comment/question on one of my posts: "A while back a friend of mine sent me a picture of a pony standing on an arched foot bridge with railings on the side of it that spanned part of Silver Lake. I think the picture was taken in 1938. He had another picture of just the bridge but this time it didn't have any railings on it, again it was taken in the 30's. How wide were these bridges? Clearly wide enough for a horse. What about a wagon? The lighthouse was in one of these pictures. Why would Ocracoke even need a bridge like these? Anyway they were interesting."

Before WWII Silver Lake Harbor was a shallow tidal creek. Islanders still use the traditional name, Cockle Creek (or just "the Creek"), to refer to the harbor. Although it was shallow (only 3-4 feet deep) it was as wide as it is today. Then, as now, the harbor was connected with the sound at the "Ditch" (the narrow inlet adjacent to the old Coast Guard Station).

Two small tidal streams flowed from Silver Lake toward the "bald beach." These streams, or "guts" as they were known by islanders, divided the village into two major areas, Around Creek (including the Community Store, Howard Street, etc.) and Down Point (from the southern side of the Island Inn to the lighthouse and in that general vicinity).

This detail from a 1939 US Army Corps of Engineers survey map shows Silver Lake (upper left), the Island Inn (the rectangle just above the top left corner of the map title and key), the two guts (on either side of the Island Inn), and four foot bridges (two spanning the guts near the Island Inn, one longer bridge at Silver Lake where it flows into the two guts, and another short bridge across a "finger" below and to the left of the longer bridge). Click on the map to view a larger image. 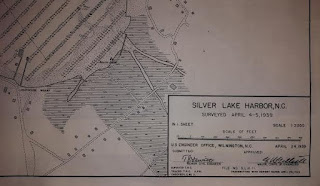 I discovered the photo below after my father died. It was probably taken in the 1930s. From left to right (back to front), to the best of my knowledge: Juliana Guth (my mother's mother), Kunigunde Guth Howard (my mother), Helena Guth Webster (my mother's sister), Lawton Howard (my father), and an unknown man. 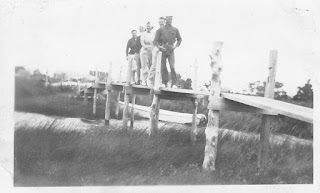 Here are three more photos of some of the foot bridges: 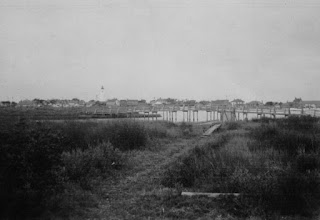 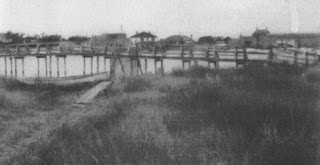 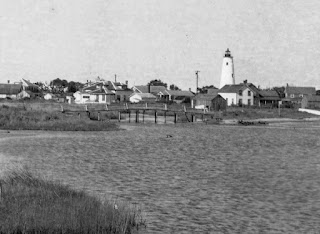 Out latest Ocracoke Newsletter is the story of the Aleta, Ocracoke's mailboat from 1944-1952, compliments of the Core Sound Museum. Click on the following link for photos, text, and audio recordings about this iconic vessel: http://www.coresound.com/saltwaterconnections/portlight/aleta/
Posted by Philip at 6:08 AM