Ocracoke residents have been taken aback by a number of recent deaths. 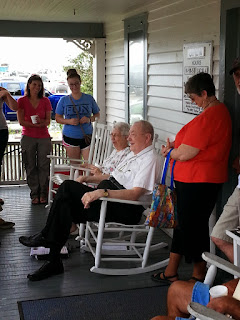 Earl had been honored by being awarded the Order of the Long Leaf Pine, North Carolina’s highest civilian honor. He also received Ocracoke Preservation Society's first annual Cultural Heritage Award for his many contributions in preserving the island's culture and heritage.

You can read a more complete obituary for Earl here: http://www.ocracokecurrent.com/149430.

Earlier in the week native islander, James Barrie Gaskill, died in Pamlico Sound while fishing his gill nets. James Barrie (1943-2017) was an iconic local fisherman and defender of Ocracoke's commercial fishing and traditional water-related occupations. He had a wonderful sense of humor, a sharp mind, and an unadulterated island brogue. Visitors and islanders will always remember him and his colorful business, Fat Boys Fish Company. 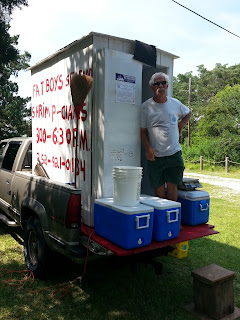 James Barrie will be missed by all. One small consolation is that he died out on the water doing what he loved.

You can read a tribute to James Barrie here: https://www.coastalreview.org/2017/06/james-barrie-gaskill-friend-of-our-coast/.

Last month local islander, Clyde Austin died at his home after a long illness. Clyde (1926-2017) was one of the four original crew members who started the Hatteras Inlet Ferry Service in the 1950’s. In 1986, he retired after 30 years of service with the NCDOT Ferry Division.

Earlier this month former island resident, Russel Newell, died. Russel (1933-2017) was another colorful character. He was an early island developer who wrote and recited his own original poems and songs, and often entertained ferry passengers with his spontaneous trombone performances.

This month's Ocracoke Newsletter is a recording of Rex O'Neal telling about the time he fell overboard when he was gigging for flounder. The story was recorded for Coastal Voices, an oral history project about the maritime heritage of the Outer Banks and Down East region of coastal North Carolina. Click here to listen to Rex telling his story: https://carolinacoastalvoices.wordpress.com/2014/06/17/rex-oneal-gigging-flounders-2/.
Posted by Philip at 5:33 AM