How Old Was She? 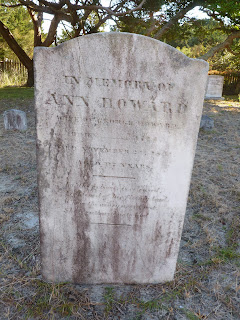 There has always been controversy about Ann's true birthday and age at death. I wrote about her in a 2013 blog post. According to the markers in the cemetery, Ann was 25 years older than her husband...curious and unlikely, but certainly possible.  Also, family genealogy indicates Ann and George's last child, Mary Elizabeth, was born in 1785, when George would have been 36 years old; Ann would have been 61 years old...highly implausible.

I was recently given a copy of a petition by William Howard (1776-1851), son of George and Ann Howard) to the Court of Pleas & Quarter Sessions September Term 1835. According NCpedia, "The Court of Pleas and Quarter Sessions served as the civil, administrative, and judicial arms of North Carolina county government beginning in the Proprietary period (1663-1729)....[T]he court heard cases in which the amount of litigation was between 40 shillings and 20 pounds, as well as a variety of minor civil and criminal actions," including "the settling of estates."

The petition states that William's mother, Ann, "is now one hundred, and eight years of age, a lunatic, and so feeble and impaired both in mind and body, as to be incapable of taking care of herself, or property."

So, at the time of her death was Ann Howard 117, 115, or 114 years old...or perhaps significantly younger?  We will probably never know. But one thing seems certain -- her family thought she was very old!

This month's Ocracoke Newsletter is about Old Christmas in Rodanthe. You can read it here: https://www.villagecraftsmen.com/old-christmas-rodanthe/.
Posted by Philip at 5:34 AM