On a small hill on the southeastern edge of Ocracoke village, obscured by cedars and other vegetation, is the crumbling concrete base of the "Loop Shack," a control hut where, during WWII, signals from underwater magnetic loops were monitored to detect off shore German U-boats by electromagnetic induction. 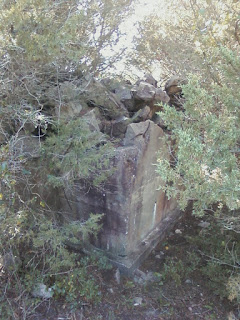 "Indicator loops," as they were called, were long lengths of cable laid on the seafloor. Developed by the British Royal Navy in the early 20th century, they were tested at the end of WWI, and employed in various locations around the world, including Ocracoke Island, during WWII.

When a submarine (which acted as a magnet) passed above the indicator loop, an induced current was produced and recorded on a paper chart, thus signaling its presence to the operator in the loop shack who could then detonate mines to destroy the submarine.

During the first half of 1942 more than 200 merchant vessels were sunk by German U-boats along the Eastern seaboard, more than 60 off the North Carolina coast.

In the summer of 1942 the Navy began construction of a U.S. Navy Section Base in Ocracoke village (where the NPS Visitors Center, NC Ferry Operations, OPS Museum, and parking area are located today). The Base was commissioned October 9, 1942. At the same time an indicator loop was laid off shore, and a loop shack was built on what was then a large dune separated from the ocean by tidal flats. Various support buildings were added nearby.


By the time the Base was completed the Navy was aware that U-boat attacks had already stopped. In 1944 the Base was converted to a top-secret Amphibious Training Station. In 1945 the Base became a Combat Information Center.

Dr Richard Walding, Research Fellow - School of Science, Griffith University, Brisbane, Australia, has compiled a thorough history and explanation of indicator loops, including the one on Ocracoke Island. To read more, click on the links below:

This month's Ocracoke Newsletter is about Old Christmas in Rodanthe. You can read it here: https://www.villagecraftsmen.com/old-christmas-rodanthe/.
Posted by Philip at 6:10 AM