The following photo and caption was published in the August 21, 1941 edition of The Beaufort News: 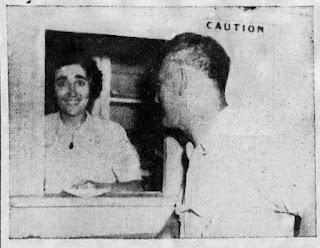 OCRACOKE ISLAND’S postoffice is located in Big Ike O’Neal’s store located on the shores of Silver Lake Harbor in the center of the community. Postmistress at the present time is Miss Elizabeth O’Neal, daughter of Big Ike.  She is shown in the above picture selling a money order to Walter O’Neal, island merchant. Ocracoke, according to its per capita, probably issues more money orders than any other community in the world. Tom Howard, retired postmaster there, once told the Beaufort News Editor that the annual sale of money orders amounted to $36,000 – (Photo by Aycock Brown).

The Post Office/Big Ike's Store was severely damaged in the 1944 hurricane. A new Post Office was then built nearby (where Down Point Decoys is today; that Post Office was moved, and is now a rental cottage behind Captain's Cargo gift shop). Captain's Landing Motel sits approximately where Big Ike's store was located. It is owned and operated by Betty Helen Chamberlin (Big Ike's granddaughter/Elizabeth O'Neal Howard's daughter) and her husband George.

Elizabeth always insisted there was no such thing as a postmistress. She was the postmaster!
Posted by Philip at 5:45 AM