Many of our readers will remember Merle Smith Davis. Merle died Thursday, December 28, 2017, at her home on Ocracoke Island. 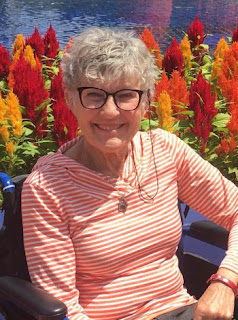 Merle moved to Ocracoke in the mid 1970s, and was an active member of the community. She added a creative touch to nearly every endeavor she pursued. A friend recounted being invited to her home for lunch after teaching a pottery class at the Methodist Church. "The plate was decorated with candied violets!" he remembered with glee. Her house on Howard Street, outside and inside, was as much a gallery of folk art and contemporary crafts as a home. First time visitors to Ocracoke, when strolling down Howard Street, would sometimes walk into her house, thinking it was the Village Craftsmen!

Merle even entered the local vernacular. When someone decorates or dresses in an especially colorful and creative way islanders are wont to exclaim, "That is right Merley, isn't it!"

Merle moved off the island for a time, then returned to teach in the local school. For the last 25 years she had been the Arts Administrator for her husband, Donald Davis, nationally known storyteller.

Merle and her enthusiasm for life will be greatly missed!