The Gulf Steam is a warm water current about 60 miles wide and, in places, almost 4,000 feet deep. It originates in the Gulf of Mexico, and flows along the eastern seaboard of the United States and Canada before crossing the Atlantic Ocean. Its maximum speed is approximately 5 1/2 miles per hour.

The cobalt-blue Gulf Stream, which flows about 30 to 50 miles offshore, has a major influence on the climate of North Carolina. The warm current (about 60 degrees in the winter) creates milder winter temperatures, particularly along the Outer Banks. 80 degree water temperature in the summer draws tourists to the Banks for swimming, surfing, snorkeling, birding, and just relaxing on the beach. Gulf Stream fishing is a major industry from Oregon Inlet to Ocracoke Inlet. 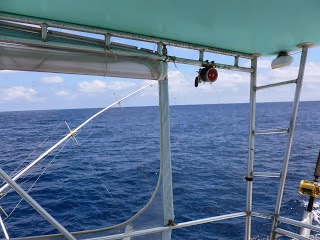 The Gulf Stream is so important to the economy of North Carolina that it has created some minor controversies, as indicated by this 1938 editorial in The Beaufort News:

"The action of a Wilmington man in seeking to deride the Gulf Stream in an article in a well known state magazine two weeks ago is a little beyond our understanding. He claimed to quote official sources of information, yet a careful perusal of the article leads to the impression that the quotations were carefully selected for the purpose of being misleading.

"The gentleman says the Gulf Stream is 100 miles off Southport. In the face of this claim the writer has a telegram from J. H. Hawley, acting director of the U.S. Coast and Geodetic Survey, who asserts that the approximately inner edge of the stream is 35 miles south east of Cape Fear. And the Wilmington man takes a dig at the Wilmington, Morehead City and Beaufort Chambers of Commerce and at the Southport Civic club for boasting a climate influenced by the Gulf Stream. Our answer to this is that if he does not like the climate along the coast he is perfectly welcome. In fact we will be glad to see him take himself further away from it. The Gulf Stream does not need ‘debunking’ from a man who know nothing about it. When the true facts about it and what it means to our coast are brought out it will be found to be worth vastly more than the average citizen now dreams of. Meanwhile, we are more than willing to accept the findings of the United States in preference to those of an illinformed individual."