This 1852 map is the earliest I have discovered with the spelling Ocracoke: 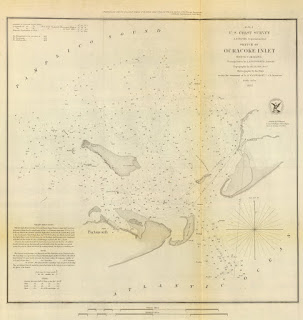 This detail of the map shows it was produced by the U. S. Coast Survey, A. D. Bache, Superintendent. 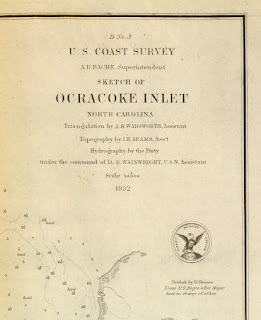 A friend recently wrote that she has  "long been intrigued by [A. D. Bache] and his family." Then, while reading Brilliant Beacons, a 2016 book about the American Lighthouse by Eric Jay Dolin, I noticed that A. D. Bache (pronounced "Back") and his brothers were closely connected to the early establishment and maintenance of lighthouses on our coasts. So, who were these Bache brothers?, I wondered.

Alexander Dallas Bache (1806-1867) was an American physicist who graduated first in his class (at age nineteen) at West Point. He later worked on the fundamentals of electromagnetism, an endeavor that led to the development of the telegraph. As an accomplished surveyor, he was appointed Superintendent of the U. S. Coast Survey in 1843, a position he held until his death. Under his leadership the Coast Survey conducted detailed surveys that mapped the eastern coastline of the United States. Bache also was chosen to serve as the civil engineer on the newly created Lighthouse Board in 1851. Interestingly, he was also a great-grandson of Benjamin Franklin, one of the founders of the new Republic.


In 1838 A. D.'s brother, Lt. George Mifflin Bache, had been chosen by President Jackson to inspect the nation's lighthouses, and to make recommendations about site selections, quality of the lights, and conditions of the towers.

In 1845 Richard Bache, another of A. D.'s brothers, was one of two Navy lieutenants sent by President Polk's Secretary of the Treasury, Robert J. Walker (the Bache brothers' brother-in-law), to inspect European lighthouses, and report on ways to improve the American beacons.

Yet another brother, Hartman Bache (1798-1872), an engineer with the U. S. Army Corps of Topographical Engineers, was chosen as west coast lighthouse inspector in 1855.

Our latest Ocracoke Newsletter, a newspaper article published in 1923 titled "Quaintest Town in America," provides a fascinating glimpse of Ocracoke Island life a century ago. You can read it here:
https://www.villagecraftsmen.com/quaintest-town-america-n-c-island/ .
Posted by Philip at 6:16 AM