For much of its history, the Outer Banks was without professional medical care. Midwives, "healers," and parents relied on home remedies to treat illnesses and injuries. During the 19th century, and into the 20th century, patent medicines became popular alternatives to local herbs and poultices. One such medicine was Grove's Tasteless Chill Tonic.

In 1878 Edwin Wiley Grove (1850–1927) patented a quinine mixture that he claimed eliminated the bitter taste of pure quinine. The medicine was marketed as a cure for the chills and fever associated with malaria. 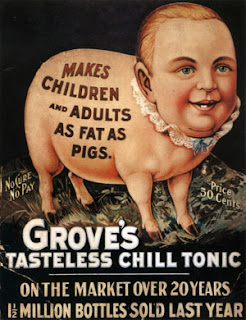 According to NCpedia, "From the earliest attempts at colonization, North Carolina was plagued by malaria. Carried in the blood of the 15th century European explorers, and transmitted by the bite of the ubiquitous Anopheles mosquito, the disease found an easy foothold amongst the Native Americans. Successive waves of colonists, naturally settling near sources of water, provided a vulnerable and concentrated population on which the mosquitoes could feed. Millponds, wells, and open farmland (where water could pool and stagnate) also provided a rich breeding ground."

At the time Grove's Chill Tonic was introduced, malaria was considered the "scourge of the South." The tonic became an overnight sensation, and a staple in Outer Banks homes for decades. In addition to being used as a remedy for malaria, it was also often taken in the fall to prevent colds.

NCpedia explains that, "An increasingly educated public, the aggressive use of chemical insecticides, and a reduction in available breeding places for mosquitoes, all contributed to a decline in [malaria], and by the late 1940's, malaria had all but disappeared from the state." Not surprisingly, Grove's Chill Tonic also disappeared. Today, the only evidence of the tonic is an occasional bottle unearthed in someone's back yard.

Look for information about other patent medicines popular on the Outer Banks in future posts.

This month's Ocracoke Newsletter is a delightful story written by Dr. Warren Silverman, who in 1981 became the island's resident physician after forty years without a doctor. The story is about Dr. Silverman's very first Ocracoke patient, island native Maltby Bragg (1904-1985). You can read the story here: https://www.villagecraftsmen.com/my-first-island-patient-by-dr-warren-silverman/.
Posted by Philip at 5:45 AM