Barbara Garrity-Blake and Karen Willis Amspacher have compiled a Heritage Guide to the Outer Banks Byway titled Living at the Water's Edge. In their section, "Love, Sickness, and Death," they write, "The lack of doctors [on the Outer Banks and coastal North Carolina] made home remedies a necessity.... Tuberculosis, pneumonia, typhoid fever, colitis, and the flu were just some of the afflictions [residents dealt with]." L.P. O'Neal of Avon contributed this comment: "Back in the old days they used to say these old women were floating around the road on Laudanum."

Yesterday I mentioned paregoric, a camphorated tincture of opium. Laudanum is another product that also contains opium, but whereas paregoric contains 4% opium, Laundanum contains 10% (in powdered form). 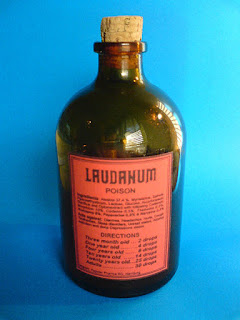 According to Wikipedia, "By the 19th century, laudanum was used in many patent medicines to 'relieve pain ... to produce sleep ... to allay irritation ... to check excessive secretions ... to support the system ... [and] as a soporific. The limited pharmacopoeia of the day meant that opium derivatives were among the most effective of available treatments, so laudanum was widely prescribed for ailments from colds to meningitis to cardiac diseases, in both adults and children. Laudanum was used during the yellow fever epidemic. Innumerable Victorian women were prescribed the drug for relief of menstrual cramps and vague aches. Nurses also spoon-fed laudanum to infants ... Initially a working class drug, laudanum was cheaper than a bottle of gin or wine, because it was treated as a medication for legal purposes and not taxed as an alcoholic beverage."

Of course, federal regulations in the early 20th century began to recognize the addictive nature of Laudanum, and its use declined dramatically.

As late as the 1970s scores of discarded Laudanum bottles could still be dug up behind many of the older homes on Ocracoke.

This month's Ocracoke Newsletter is a delightful story written by Dr. Warren Silverman, who in 1981 became the island's resident physician after forty years without a doctor. The story is about Dr. Silverman's very first Ocracoke patient, island native Maltby Bragg (1904-1985). You can read the story here: https://www.villagecraftsmen.com/my-first-island-patient-by-dr-warren-silverman/.
Posted by Philip at 5:53 AM