I have written about yaupon tea in the past, but I just recently discovered two informative articles about this island drink: "The Yaupon Holly Tradition," by Jared Lloyd in the Coastal Review Online (https://www.coastalreview.org/2014/11/yaupon-holly-tradition/), and "The Forgotten Drink That Caffeinated North America for Centuries" by Ben Richmond (https://www.atlasobscura.com/articles/what-is-yaupon-tea-cassina).

Lloyd explains that Native Americans in the Carolinas used the leaves of the yaupon holly, a shrub that grows wild on Ocracoke Island, to brew a tea rich in caffeine.The leaves were harvested and roasted in the early summer when caffeine content was at its peak. Yaupon was traded with other tribes as far west as Illinois. Early colonists learned to drink yaupon tea when royal taxes and import duties made other teas too expensive.

Richmond points out that "William Aiton, an eminent British botanist and horticulturist, director of Kew Gardens, and “Gardener to His Majesty,” is credited with giving cassina [yaupon tea] the scientific name it bears to this day: Ilex vomitoria. Ilex is the genus commonly known as holly. Vomitoria roughly translates to 'makes you vomit.'” Richmond goes on to write that "Cassina does not make you vomit. Both modern scientific analysis and centuries of regular use by Southerners confirms this. But several early European accounts of cassina mention vomiting. Cassina seems to have been used in elaborate purification rituals where men sat in a circle, sung or chanted, and took turns chugging and then throwing up hot cassina. Yet other detailed, first-hand accounts of indigenous people drinking cassina don’t mention vomiting at all. Anthropologist Charles M. Hudson and others have suggested that a plant with emetic properties may have been added to the cassina brew (unbeknownst to European observers) or that the black drink ceremony may not have involved cassina at all."

There is no question that yaupon tea rivals any of the commercial teas available for sale today. Lloyd reports that "the Outer Banks is thought to have been the last holdout [for drinking yaupon tea]. The tea was sold in restaurants along the Banks into the 1970s; Ocracoke Island is the last known location to have served yaupon tea." 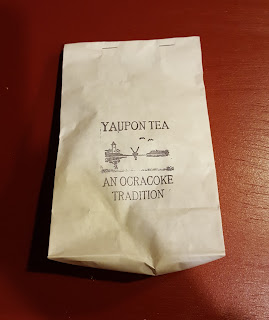 The label on the back of the bag reads: "Yaupon trees grow naturally along the Outer Banks of North Carolina. Their berries are an important source of food for birds, & their leaves have been used in making tea for thousands of years. Croatan Indians on Ocracoke & Hatteras Islands used the tea, which they called the Black Drink, for medicinal & ceremonial purposes & traded it to their neighbors to the west. Later residents enjoyed yaupon tea as a replacement for Asian tea & coffee, especially during the Revolutionary & Civil Wars when these were hard to obtain Many Ocracoke old-timers remember their parents & grandparents drinking it.

"Yaupon is rich in antioxidants, and it is the only native North American plant containing caffeine. It is claimed to be a tonic, an aphrodisiac, & a cure for hangovers.

"To prepare, crumble a spoonful of leaves in a teaball & steep in very hot water. To make 4 cups, add a half cup of leaves to 5 cups water & boil. Add a sprinkle of cinnamon or a sprig of mint. Serve plain, with milk, or with honey & lemon." 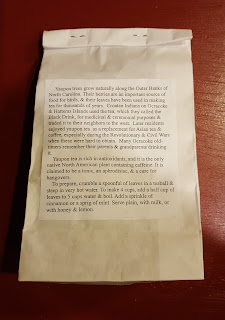 Jared Lloyd's article ends on this note: "Today, modern science has begun to focus on yaupon holly as another possible weapon in the fight against cancer. Thus far, yaupon holly has proven itself to be packed full of antioxidants, beneficial polyphenols and anti-inflammatory properties that show promising results against colon cancer."

Our latest Ocracoke Newsletter is a history of the Ocracoke Lighthouse, with information (and an artist's sketch) about the earliest lantern room. You can read the Newsletter here: http://www.villagecraftsmen.com/ocracoke-lighthouse/.
Posted by Philip at 6:05 AM