The following Advertisement for the U.S. Independent Telephone Association was published in various magazines in 1961:

An Independent telephone company changed the scene on Ocracoke Island. Lying 20 miles off North Carolina, it once served as a haven to the famous pirate, Blackbeard. Nearby, radio was born and the Wright Brothers opened the Air Age. But until 1956, Ocracoke had no commercial telephones.

On Ocracoke island, vacationers’ paradise, there are no sidewalks, traffic lights, banks or billboards.

But today, there are telephones. Providing this service to 550 sea-loving citizens is one of America’s 3,300 independently owned and managed telephone companies, Carolina Telephone and Telegraph. 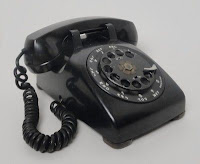 For long distance calls, a radio system links the Island to the mainland so that any point in the nation can be reached in seconds.

This could be termed the “last frontier” for Carolina Telephone. One of American’s largest Independents, it serves a major section of North Carolina.

The case of Ocracoke is not new to the Independent telephone industry. Its member companies are bringing up-to-the-minute telephone service to every corner of the nation, including Alaska, with some settlements above the Arctic Circle, and all of Hawaii.

In fact, Independents serve 11,000 communities, large and small, with a $4 billion network of facilities…to help you reach all America.

If you have ever wondered how the street you live on or vacation on got its name, or are just curious about other street names, take a look at this month's Ocracoke Newsletter. We have compiled a list of every official street in Ocracoke village, along with one or more paragraphs explaining how they came to be named. You can read the Newsletter here.