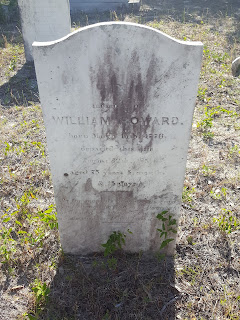 "As for man, his days are as grass,
As a flower of the field so he flourisheth
For the wind passeth over it, and it is gone,
And the place thereof shall know it no more."

William Howard was the son of George Howard, and grandson of William Howard, Sr., colonial owner of Ocracoke Island and presumably quartermaster for Blackbeard the pirate. His grave is in the first row in the old George Howard cemetery on British Cemetery Road.

This month's Ocracoke Newsletter is a delightful story written by Dr. Warren Silverman, who in 1981 became the island's resident physician after forty years without a doctor. The story is about Dr. Silverman's very first Ocracoke patient, island native Maltby Bragg (1904-1985). You can read the story here: https://www.villagecraftsmen.com/my-first-island-patient-by-dr-warren-silverman/.
Posted by Philip at 5:46 AM