The following information is from Ethnohistorical Description of the Eight Villages adjoining Cape Hatteras National Seashore and Interpretive Themes of History and Heritage, November 2005 (images added):

Hatteras Village is home to the oldest grocery store still operating on the island; the Burrus Store, later to become the Burrus Red and White. The store was founded in 1866 by W.Z. Burrus’ grandfather, a blockade runner and Union sympathizer who spent the Civil War in prison. 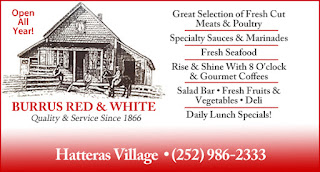 After the war, he returned to Hatteras Island where his father operated a grist mill, and established the store. “Instead of just staples like molasses, sugar, salt, flour, lard and so forth we started getting some canned goods in and bottled drinks from Washington, New Bern, and Elizabeth City by freight boat,” W.Z. Burrus recalled. The Burrus family rode the wave of economic activity that followed the Civil War in Hatteras Village, as did Homer Styron's store and A.J. Stowe, the three of whom were in business by 1872. By 1884, R.W. Midgett and Uriah O’Neal had stores as well.

Customers from Ocracoke to Avon bought items on credit, and the pages from the ledger were apparently cut by razor and given to the debtor as a receipt when the account was paid. “They had to come in by boat. They would bring fish in to sell to the fish houses, and stop and buy groceries,” Burrus reflected. Once the road and bridge were built, it changed the nature of doing business on the island. “It brought a lot more people in and made it easier for us to come and go and changed our way of life right much,” Burrus said. “We have less time on our hands than we did then. It seemed like we had more time to ourselves.” 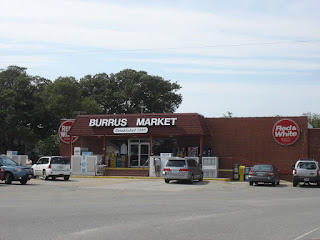 This month's Ocracoke Newsletter is a delightful story written by Dr. Warren Silverman, who in 1981 became the island's resident physician after forty years without a doctor. The story is about Dr. Silverman's very first Ocracoke patient, island native Maltby Bragg (1904-1985). You can read the story here: https://www.villagecraftsmen.com/my-first-island-patient-by-dr-warren-silverman/.
Posted by Philip at 5:28 AM