Periodically in the summer months the National Park Service will open the Ocracoke Lighthouse so visitors can step inside. Visitors are not permitted to climb the spiral stairs because access to the lantern room is narrow and precarious, and for fear of damage to the historic structure.

The original stairway was wooden, and attached to the inner wall of the tower. 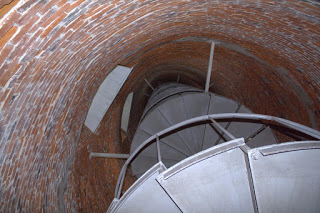 Shortly after the renovation Alice Rondthaler wrote this about the new stairway:

"Historic Ocracoke Island lighthouse has just undergone a major operation. The old wooden stairs which circled the inside walls to the lens room 80 feet above its base has been torn out and replaced by a steel spiral stairway. The wooden stairs had badly rotted because of dampness and were declared unsafe following the hurricane of 1944, at which time ladders were put in for the use of the keepers, and the visiting public was no longer permitted to climb to the lens room. Cost of the new installation was approximately $3,000. The work of putting in the stairway was done by a Coast guard field force."

This month's Ocracoke Newsletter is a delightful story written by Dr. Warren Silverman, who in 1981 became the island's resident physician after forty years without a doctor. The story is about Dr. Silverman's very first Ocracoke patient, island native Maltby Bragg (1904-1985). You can read the story here: https://www.villagecraftsmen.com/my-first-island-patient-by-dr-warren-silverman/.
Posted by Philip at 5:53 AM