As most of our readers already know, the Ocracoke Preservation Society has purchased the Island Inn. The idea is to tear down the two badly deteriorated wings. In fact, the two-story wing has already been demolished. After the other wing is removed this will leave the historic 1901 center section to be restored. Eventually, OPS hopes that will serve as a village Visitors Center with public restrooms. In case you missed our article about the history of the Inn, you can read it here.

And in case you haven't seen any of the demolition photos on Facebook, here are a few I took recently: 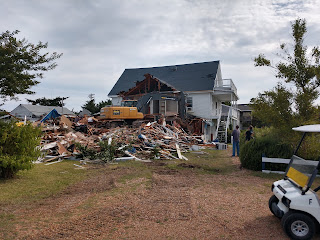 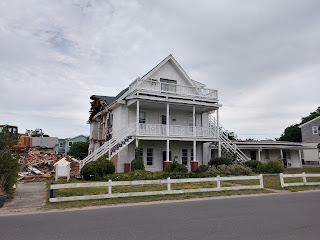 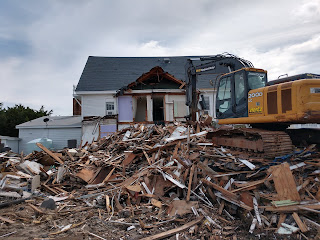 On another note, a reader left this comment on a recent post: "Remember the phone booth 2 feet from the side of the street on the end of the community store? Before cell phones, that and the phone booth across the street from the island inn were probably the busiest phones on Ocracoke in the summer. sometimes there were lines of visitors (mostly teenagers) waiting to use the coin operated phone. Philip, do you have any idea when those phones were finally taken out? Fun times back then - they stay with you forever."

During the demolition I noticed the Island Inn's coin-operated phone booth in the rubble. After reading the comment above I went over there and discovered someone had propped it up on the side of one of the outbuildings. Here are two photos: 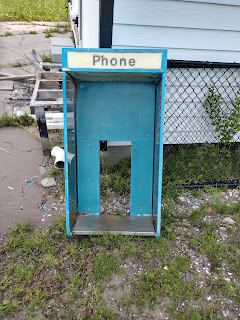 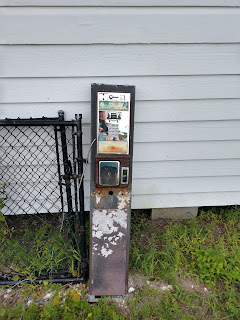 And now, one more photo. This one was taken of the Island Inn in the early 1960s. Note the color. Then go back and look at the second photo from the top. If you enlarge the photo and look carefully on the bottom left of the building, right under the stairs, you will see a section of exposed wall that is the same color as in the 1960s photo. 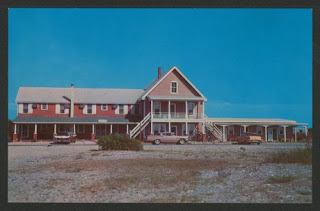 If you have ever wondered how the street you live on or vacation on got its name, or are just curious about other street names, take a look at this month's Ocracoke Newsletter. We have compiled a list of every official street in Ocracoke village, along with one or more paragraphs explaining how they came to be named. You can read the Newsletter here.
Posted by Philip at 5:52 AM