A few days ago I had a telephone message from a neighbor who said that he had made a "discovery." I was off the island, and when I called him back he explained that he had found a very old piece of wood while he was looking for a window prop. David lives in a century old house and, like folks of a bygone era, still uses wooden sticks to prop open his windows.

The interesting thing about this stick, David said, is that it has the initials "E.W.H." carved in it. As David pointed out, Howard is the only historic island name that begins with "H." Surely one of my ancestors had left his mark on this window prop. But I couldn't think of anyone in my family with those initials. There was Enoch Ellis Howard, and James Wheeler Howard...but no E.W. Howard.

David called back the next day. He had carried the stick around with him, showing it to various islanders. On closer examination everyone agreed that the first letter was "L," not "E." Small chips had created the impression of the letter "E."

The mystery appears to be solved. Lawton Wesley Howard was my father's name! He must have carved his initials into the window prop about ninety years ago, when he was a young boy. Actually, he often personalized things that he made (ship's wheels, rocking chairs, even additions to our house). It was a family trait. While I was restoring my grandparents' house I discovered one interior tongue-and-groove board with my grandfather's initials scrawled on the back side.

How the window prop came to reside at my neighbor's house we'll never know. But it is now back home, propping up one of my antique windows. 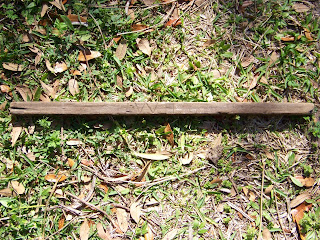 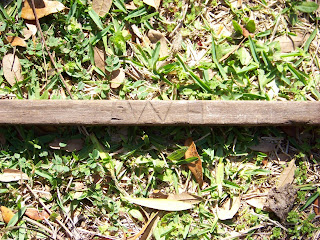 This month's Ocracoke Newsletter is about "Ocracats" and was written by Pat Garber. You can read it here: http://www.villagecraftsmen.com/news031710.htm.
Posted by Philip at 10:25 AM