Almost one hundred years ago Augustus Abner McGuire, a diver, died while attempting to make a repair in the hull of a vessel offshore of Ocracoke. His body was brought to the island and buried near the Howard family and Williams family cemeteries along what is now known as British Cemetery Road.

For many years a cedar post marked the head of the grave, and McGuire's diving boots were placed at the foot of the grave. Almost immediately islanders began feeling that the ghost of "Old Diver," as he came to be known, haunted the narrow lane and wooded area near where he was buried. For many years folks have been wary of walking there after dark.

Eventually the cedar post rotten away, and the boots were removed.

Just last week a wooden marker was placed in the vicinity of Old Diver's grave. Made by island craftsman, Len Skinner, and paid for by the Ocracoke Preservation Society, the marker is a fitting tribute to an island legend. 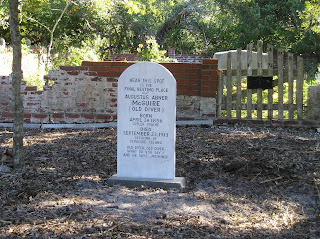 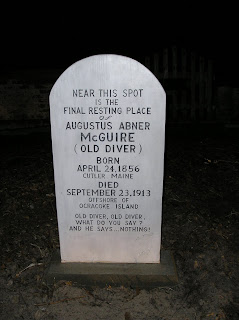 Click on the photo below to view a selection of puzzle boxes from Village Craftsmen's online catalog.

Our latest Ocracoke Newsletter is a history of the early twentieth century Doxsee Clam Factory on Ocracoke island. Click on the following link to go directly there: http://www.villagecraftsmen.com/news112110.htm.
Posted by Philip at 6:08 AM