On Tuesday evening Walt Wolfram, linguist from NC State University, researcher of the distinctive Ocracoke brogue, and long-time friend of of the island, gave a presentation after our annual Ocracoke Preservation Society meeting. In between playing recordings of a number of native speakers (including Roy Parsons, Essie O'Neal, Blanche Howard Jolliff, James Barrie Gaskill, & Chester Lynn) Walt made a very interesting comment.

He had just played a vintage recording of an old-time islander (she was born in 1892) relating the 1919 story of the young island woman who, at age 21, "changed into a man."

Walt said that he's been studying language for more than 40 years, and during that time he's researched four or five other islands. He pointed out, not surprisingly, that residents of islands can often be xenophobic. The Ocracoke recording illustrated something quite different. It was remarkable, he said, that even nearly a century ago, Ocracokers exhibited unusual tolerance, acceptance, and openness towards people who were different.

One of the reasons Walt so enjoys Ocracoke is because of the island's ready embrace of him and other "dingbatters." His comments reminded me of the wreck of the Vera Cruz in Ocracoke Inlet in 1903. The ship was carrying 399 black people from the Cape Verde islands, and they spoke only Portuguese. After being rescued, the Cape Verde islanders were housed and fed by the good people of Portsmouth (just across the inlet) for several days.

Today Ocracoke carries on that tradition of hospitality, openness, and tolerance. It's one of many reasons why I love calling Ocracoke "home."

Click on the photo below to view a selection of beautiful carved birds in Village Craftsmen's online catalog. 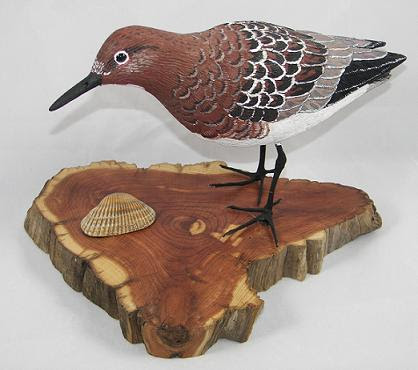 Our latest Ocracoke Newsletter is an article, with a number of photos, documenting the history of water cisterns on Ocracoke Island. Click on the following link to go directly there: http://www.villagecraftsmen.com/news102110.htm.
Posted by Philip at 6:40 AM