Today, eighteen wheelers and other trucks bring groceries, gasoline, hardware, beer, store inventories, UPS packages, and all manner of other items to Ocracoke. Of course, they ride the ferries just like residents, visitors, Park employees, sales representatives, and anyone else coming to the island.

How did Ocracokers get supplies before the 1950s, when the first ferries began crossing Hatteras Inlet?

For more than two centuries Ocracoke's main connection to the rest of the world was across Pamlico Sound. By the mid-1800s, bugeyes, two masted, broad beamed, flat bottom sailboats about 60 feet long, served to carry freight and supplies (store inventories, building supplies, cook stoves, pony carts...and later, refrigerators, bathtubs, and automobiles) from merchants in Washington, NC to Ocracoke; and fish from the island to outlets on the mainland.

A typical bugeye, the Edna Lookwood, from the Chesapeake Bay (photo courtesy NOAA): 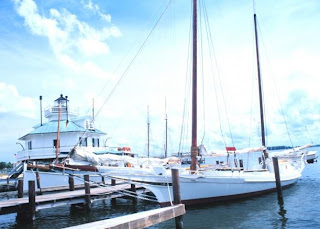 Prior to 1938 when Ocracoke village was electrified, 300 pound blocks of ice were among the most sought after commodities brought to the island by freight boats. Now and then dead bodies were carried off the island on the freight boats. At those times the vessel's flag was flown upside down at half mast.

The Annie was one of the first freight boats to serve Ocracoke. Later, the Nellie, the Preston, the Relief, and the Russell L brought freight to the island. By the time the Dryden took over the route, gasoline engines were being installed in the bugeyes.

The Bessie Virginia was the last freight boat to serve Ocracoke Island. She was a gasoline powered, 65 foot vessel that was capable of carrying ninety tons of freight. Van Henry O'Neal was captain; Powers Garrish was mate. The Bessie Virginia was retired in the early 1960s after the Oregon Inlet bridge was built, making car and truck connections to the north much more convenient.

Our latest Ocracoke Newsletter is an article written by my Uncle Marvin in the early 1950s. You can read it here: http://www.villagecraftsmen.com/news102111.htm.
Posted by Philip at 6:13 AM