Several years ago, soon after my father died, Amy and I went through his pictures. He had written on the backs of many of them, with names and dates. Then we found this photo: 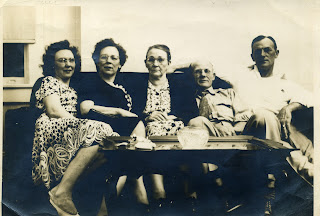 On the back my father had written "This was taken the same night."

Amy and I have laughed and told this story many times since. Luckily I recognized all of the people in the picture. From left to right they are my Aunt Thelma, Aunt Agatha (pronounced a-GAY-thuh, by the way!), Grandmama Aliph, Uncle Marvin, and Uncle Enoch.

Later on we discovered the following picture of Uncle Marvin fooling around with a mop wig and twig mustache. It was the same size photo as the previous one, with the same coffee table and vase in the foreground. 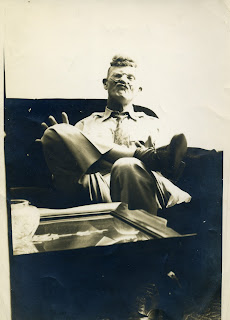 We looked on the back. My father had written, "This was taken the night before Garland run us out."

I couldn't remember who Garland was, so a few days ago I stopped by to visit Blanche. I showed her the pictures. She not only reminded me that Garland was Aunt Thelma's second husband; she knew when the photos were taken...because she remembered when Garland ran them all out of his house!

It was 1947. My grandfather was in the hospital in Norfolk, and my grandmother and my uncles and aunts (and my father) were staying with Aunt Thelma and Garland. I guess they got too rowdy for Garland and he made them leave. Uncle Marvin does look like he was having fun!

Our latest Ocracoke Newsletter is an article written by Uncle Marvin in the early 1950s. You can read it here: http://www.villagecraftsmen.com/news102111.htm.
Posted by Philip at 5:23 AM