The US Life Saving Service employed an elaborate system of ropes, pulleys, and life ring to rescue sailors stranded on wrecked vessels. The keeper and six (later, eight) surfmen pulled the beach apparatus cart to the wreck. There they buried the sand anchor, positioned the brass Lyle gun, shot a line to the ship, then rigged the breeches buoy and conveyed the victims to shore.

One of the more obscure pieces of life saving equipment was the faking box. Inside the box was a frame with three to four dozen 10" - 12" long wooden pins arranged on the periphery. The shot line (which was tied to a projectile that was fired to the wreck) was wound around the pins in an overlaid zig-zag pattern. At the scene of the wreck the frame (with the rope wound on the pins) was turned upside down, and the rope was carefully pushed off the pins. This arrangement allowed the shot line to travel without becoming tangled.

The photo below, courtesy of the Outer Banks History Center, shows the faking frame resting on the beach after the shot line has been removed. 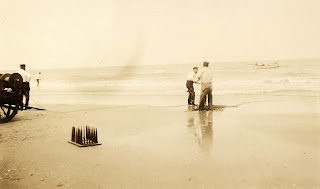 Fake is a nautical term meaning to coil (a rope). It is of obscure origin.
Our latest Ocracoke Newsletter is a brief history of Ocracoke and the Lost Colony. You can read it here: http://www.villagecraftsmen.com/news112111.htm.
Posted by Philip at 6:09 AM