On July 4, 1584, two English barks under the command of Philip Amadas and Arthur Barlowe began their exploration of the "New World." They had been sent by Sir Walter Raleigh to locate a suitable site to establish an English colony on the American coast. More expeditions were to follow.

In 1590 Thomas Hariot published A Briefe and True Report of the New Found Land of Virginia. This volume included an engraving (below) by Theodor de Bry based on watercolor illustrations made by Capt. John White, commander of the 1587 expedition sent by Raleigh. It shows the Outer Banks of North Carolina.

Please enlarge the map to view a better image.

This 1590 map is oriented with North (Septentrio) to the right, and shows Wokokon (Ocracoke) just above the sailing ship on the left. 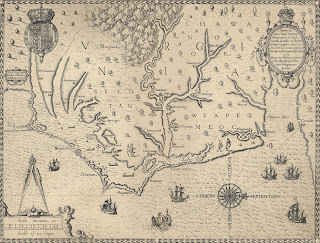 The detail below shows Wokokon more clearly. Wokokon is identified in a key to the White-de Bry map in Appendix I of David B. Quinn's Roanoke Voyages (London, 1955):

"Wokokon: 1. An inlet near, or identical with, present-day Ocracoke Inlet. 2. An Island, which Arthur Barlowe called 'an out Island vninhabited,' probably consisting of the southern half of modern Ocracoke Island. The etymology of Wokokon (perhaps from Proto-Algonquian waxkahikani, 'stockade' or 'stronghold') and the palisade symbol northeast of the inlet may indicate a palisaded town abandoned before English contact. De Bry used this symbol with some lack of restraint to indicate towns without palisades, such as Pomeiock (which see), and perhaps other things; so it is far from certain what the symbol signifies here." 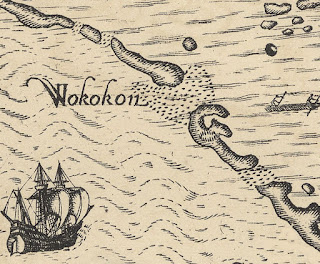 This month's Ocracoke Newsletter is the dramatic story of life-saver Rasmus Midgett and his rescue of the crew of the barkentine Priscilla in August, 1899. You can read it here: http://www.villagecraftsmen.com/news052116.htm.
Posted by Philip at 6:18 AM