Ocracoke As I First Knew It

Following is the beginning of chapter 11 in Carl Goerch's book, Ocracoke. 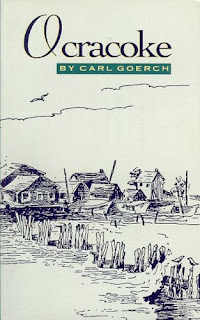 "The first time I visited Ocracoke was during the summer of 1915.

"In those days there were sailing vessels (sharpies) with auxiliary motors that operated on a regular schedule between Washington [NC] and the island. One boat left Washington Wednesday evening at eight o'clock, the other left Saturday evening, same time.

"It was an all-night trip. Nobody thought seriously of going to sleep, although some folks spread blankets on the deck and managed to get in several naps of short duration.

"You couldn't do much sleeping, however, with a constant jabbering of conversation going on throughout the night. Then, too, there were no rules or regulations against taking a drink, and this helped enliven things considerably.

"As a general thing, it was a bedraggled looking bunch of passengers when they finally arrive at Captain Bill Gaskill's wharf at 6:30 in the morning.

"Captain Bill would be on hand to help dock the boat and see that baggage was taken care of.

"His hotel was known as Pamlico Inn. In those days there was no inside plumbing. This also was true of the Bragg house and other boarding houses. Rough boards comprised walls and ceilings of the guest rooms. Furniture was of the simplest kind. There was no electricity."

Our Ocracoke Newsletter for this month is an article by Philip Howard, My Ocracoke, Living amidst 250 years of Howard family history. You can read it here: http://www.villagecraftsmen.com/news082116.htm.
Posted by Philip at 6:12 AM