Calvin O'Neal, Alice Rondthaler, and Anita Fletcher include this paragraph in their book, The Story of Ocracoke Island:

"...Roanoke Island, with its claim to first English white settlers on American soil, must share honors with Ocracoke Island [Wokokon] for, just as the Pilgrims of old disembarked at Provincetown on Cape Cod before finally settling at Plymouth, Massachusetts, so at least one, and possibly more, of the Raleigh expeditions made a landfall at Woccocon [or Wokokon, now Ocracoke] before proceeding on to Roanoke.

"Hakluyt's history of the Raleigh expeditions testifies to this fact in the following statement: 'At length, the preparations being completed, a fleet of seven vessels, all small however, and capable of entering the inlets of the Virginia Sounds...set sail from Plymouth, England, April 2, 1585, and after various adventures that caused delay the fleet passed the Cape Feare on June 23rd and days later came to anchor at Wokokon southwest of Cape Hatterask." 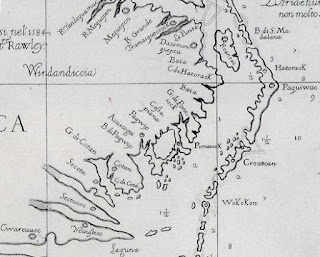 Our Ocracoke Newsletter for this month is an article by Philip Howard, My Ocracoke, Living amidst 250 years of Howard family history. You can read it here: http://www.villagecraftsmen.com/news082116.htm.
Posted by Philip at 5:50 AM