Ellen Marie Cloud has collected and published a booklet of "Abstracts from Miscellaneous Newspapers Published in Beaufort, NC 1876-1893." In the Weekly Record, February 3, 1888 we learn that "Russia and Germany both continue active war preparations," that there was "a bill introduced to the U.S. Senate by Senator Ransom to appropriate $500,000 to build a light house on Hatteras Shoals," and that "Wizard Oil is for sale by Allen Davis."

Of course, we know that Europe erupted in war a quarter century later. In other news, as it turned out, in spite of the half million dollar appropriation, a lighthouse was not constructed on Hatteras Shoals until 1966! So that leaves "Wizard Oil"? I wondered what that was. 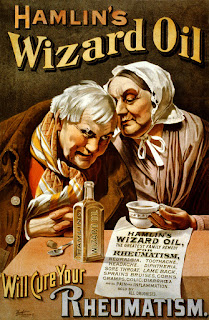 I soon learned that Hamlin's Wizard Oil was a patent medicine sold in pharmacies and medicine shows (and apparently by individuals) as a cure-all for everything from headache to cancer. Their slogan was "There is no Sore it will Not Heal, No Pain it will not Subdue."

More than one half of its volume was alcohol (no wonder it subdued pain). Other ingredients included camphor, ammonia, chloroform, sassafras, cloves, and turpentine. No doubt many an Ocracoke Islander ingested or applied Wizard Oil to cure various ailments.

From what I gather in my reading some forms of "Wizard Oil" are still around seducing gullible consumers.

This month's Ocracoke Newsletter is about earthquakes that have affected Ocracoke and the Outer Banks. You can read the newsletter here: http://www.villagecraftsmen.com/news092116.htm.
Posted by Philip at 6:06 AM