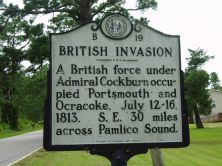 "On June 12, 1812, tensions between the United States and Great Britain concerning American expansionism and the Royal Navy’s impressment of American sailors resulted in a declaration of war. Although a small number of North Carolinians, most notably Captains Benjamin Forsyth and Johnston Blakeley took part in the conflict as members of the United States military, the state played only a minor role in the war.

" Perhaps the most important contributors to the state’s war effort were the privateers such as Otway Burns who outfitted their vessels in North Carolina’s port cities. Burns’s vessel, the Snap Dragon, savaged British shipping off the coast. In July 1813, a little over a year after the war was declared, a British fleet comprised of a 74-gun man-of-war, three frigates, a brig, three schooners, and several transport vessels containing nearly 3,000 British soldiers and marines, appeared off North Carolina’s coast. Under the command of Admiral George Cockburn, the expedition was headed to Norfolk and Hampton from Bermuda, intent on destroying privateering bases.

" Cockburn’s fleet landed troops at Ocracoke and Portsmouth on July 11-12, after a brief sea engagement with an American privateer, the Anaconda, and a French vessel, the Atlas. The Anaconda was sunk, and the Atlas was captured, but the Mercury, an American Revenue cutter managed to outrun the British fleet and escape. Among the British troops landed on the two islands were 300 regulars of the 102nd Regiment of Foot and 400 marines and sailors, all under the command of Lt. Col. Charles Napier.

"The British plundered the islands of “200 head of cattle, 400 sheep, and 1,600 fowls of various kinds.” The troops paid the inhabitants for what they took but at prices far below actual value. The Redcoats also took customs collector Thomas Singleton’s “papers in his library” and “tore up his law books.” Only one American, Richard Carey, a Portsmouth native, was killed during the expedition. While attempting to flee the island with his wife and family in a small boat, Carey was fired on and mortally wounded by a British marine.

"As news reached the mainland of the British invasion, militia units from across the state gathered at New Bern. Fortifications were dug and musket flints, bullets, and powder gathered. The militiamen were described as being “high spirits and eager to meet the brutal foe. God grant that they may do honor to themselves and country.” Poorly armed, with little military experience, they would have been no match for the British regulars. One citizen soldier described the corps as “with our sparse columns hastily marshaled and but poorly furnished—without any assurance of victory, than a firm and intrepid spirit.

"The North Carolina militia would never have the opportunity to test that “spirit.” On July 16, the British fleet departed, headed up the eastern seaboard for Halifax, Nova Scotia. Admiral Cockburn would later gain infamy as the British officer who burned Washington, D.C. in 1814, while Lt. Col. Napier would eventually leave the North American theatre to fight against Napoleon. Napier remained in the army until shortly before his death in 1853, having served during his military career in North and South America, Europe, South Africa, and India."

You can read more about Ocracoke and the War of 1812 on our Ocracoke Newsletter page: http://www.villagecraftsmen.com/news102112.htm.

This month's Ocracoke Newsletter is a recording of Rex O'Neal telling about the time he fell overboard when he was gigging for flounder. The story was recorded for Coastal Voices, an oral history project about the maritime heritage of the Outer Banks and Down East region of coastal North Carolina. Click here to listen to Rex telling his story: https://carolinacoastalvoices.wordpress.com/2014/06/17/rex-oneal-gigging-flounders-2/.
Posted by Philip at 5:32 AM