During WWII the US Navy regularly sprayed Ocracoke village with DDT to combat the hoards of hungry mosquitoes that attacked its personnel stationed here. In addition to killing mosquitoes, many other insects and other animals were affected. Some were nearly wiped out. Frogs and toads were among the major casualties.

According to oral tradition, an Ocracoke woman who was originally from Hatteras Island returned home after the war for a short visit. There she collected a pair of toads and put them in a shoebox. Back on Ocracoke she released the toadss in her garden.

Today, toads and frogs are thriving on Ocracoke. They have been particularly numerous around my house and on the Hammock Hills Nature Trail this summer. 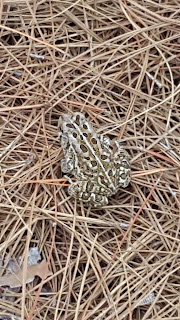 This month's Ocracoke Newsletter is a contemporary account of the December 24, 1899 wreck of the Steamship Ariosto. You can read the Newsletter here: http://www.villagecraftsmen.com/news072117.htm.
Posted by Philip at 5:57 AM