On Friday I wrote about a vendue held on Hatteras Island in 1812. The Notice included this sentence: "[The] articles...will be sold for Dollars and Cents, or New-York Bills."

I wondered what a New-York Bill was. This is what I learned. "For most of the colonial period, trade consisted of bartering and using foreign money. But soon, the colonies began printing their own money, which functioned more like a gift certificate. The bill would allow the recipient to withdraw silver money from a bank" (https://www.littlethings.com/early-american-currency/). 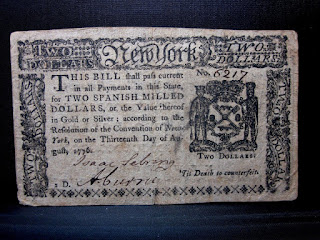 The New York Bill pictured above says, "THIS BILL shall pass current in all Payments in this State for TWO SPANISH MILLED DOLLARS, or the Value thereof in Gold or Silver; according to the Resolution of the Convention of New-York, on the Thirteenth Day of August, 1776."

According to Wikipedia, "The Spanish dollar was the coin upon which the original United States dollar was based, and it remained legal tender in the United States until the Coinage Act of 1857."

Even on the remote islands of the Outer Banks New York Bills and Spanish Dollars were still being used as late as the early nineteenth century.

This month's Ocracoke Newsletter is a recording of Rex O'Neal telling about the time he fell overboard when he was gigging for flounder. The story was recorded for Coastal Voices, an oral history project about the maritime heritage of the Outer Banks and Down East region of coastal North Carolina. Click here to listen to Rex telling his story: https://carolinacoastalvoices.wordpress.com/2014/06/17/rex-oneal-gigging-flounders-2/.
Posted by Philip at 6:08 AM