Below is a photo of island native, Bradford, holding an antique bottle unearthed on Ocracoke. Embossed on the bottle are these words: Webb's Double Soda and Other Waters - To Her Majesty - Islington - London. 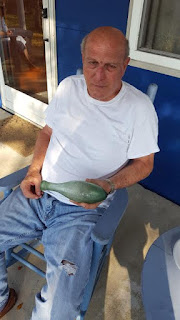 According to MidLife Pickers, this bottle "was likely made in the UK between 1850 and 1880 because it is made of thick heavy glass and has an applied blob top."

The web site goes on to explain that "torpedo bottles date from the middle of the 19th century to the early 20th century. They were made of heavy glass and in most cases held carbonated water. They were sealed with a cork, which needed to remain wet. A dried out cork led to shrinkage, which allowed carbonating gases to escape. Therefore, the bottles were purposely shaped in a way so that they could not stand up, but had to remain on their sides, thus preventing the possibility of a dried out cork."

This month's Ocracoke Newsletter is a contemporary account of the December 24, 1899 wreck of the Steamship Ariosto. You can read the Newsletter here: http://www.villagecraftsmen.com/news072117.htm.
Posted by Philip at 5:46 AM