As you might expect, Ocracoke has a number of storm and hurricane stories. This one, told by islander Ike O'Neal (1885-1968) about the 1899 hurricane to Associated Press columnist Hal Boyle, was recounted by Lawrence Maddry, former journalist for the Virginian-Pilot.

"[Ike O'Neal] said as the tide rose around their home, his father handed him an ax and told him to scuttle the floor [to allow rising water to enter, and prevent the house from floating off its foundation].

"'I began chopping away and finally knocked a hole in the floor.' O'Neal recalled. 'Like a big fountain the water gushed in and hit the ceiling, and on top of the gusher was a mallard duck that had gotten under our house as the tide pushed upward.'"

Below is a photo of the Captain Bill Thomas & Eliza Gaskill Thomas house (more recently called the Barksdale Cottage). This house was built in 1899, soon after the hurricane mentioned above. It was the first house on Ocracoke specifically built with a trap door in the floor to allow the owners to let the tide in. 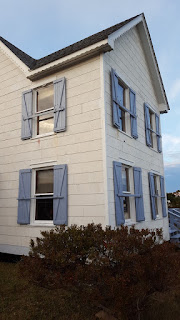 This month's Ocracoke Newsletter is a recording of Rex O'Neal telling about the time he fell overboard when he was gigging for flounder. The story was recorded for Coastal Voices, an oral history project about the maritime heritage of the Outer Banks and Down East region of coastal North Carolina. Click here to listen to Rex telling his story: https://carolinacoastalvoices.wordpress.com/2014/06/17/rex-oneal-gigging-flounders-2/.
Posted by Philip at 5:45 AM