In 1934 Ocracoke native Lloyd Fulcher was working in New York City as captain of the Binghamton, a steam-powered double-ended ferryboat serving New York Harbor. Built in 1904/1905 the Binghamton operated from the Hoboken Terminal to Barclay Street, a twelve-minute trip of approximately 1 and 3/4 miles.

According to Wikipedia, the Binghamton was initially built for the Delaware, Lackawanna & Western Railroad’s Hoboken Ferry Company to transport 986 passengers along with their vehicles, and she was perhaps the last surviving steam ferry built to serve New York Harbor.

"Four persons were injured and 600 commuters were shaken up today when the crowded Lackawanna ferryboat Binghamton crashed into its slip in the lower Hudson today. Capt. Lloyd Fulcher gave the usual orders to reverse the engines as the ferryboat entered the slip, but there was no response. It is believed there was an accident to the vessel's crankshaft. Those injured were: Margaret Fitzgibbons, 20, of Jersey City; H. A. Harter, 25, of West Orange; James Johnson, 31, of Summit; Anna Lee 20, of Newark." 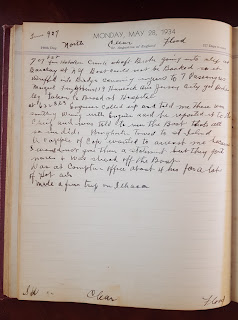 "Engineer called up and told me there was something Wrong with Engine. Said he reported it to the Chief and was told to run the Boat. That's all, so we did. Binghamton towed to St. Island. A cuppole [couple] of Cops wanted to arresst [sic] me because I would not give them a statement but they got none & was shoad [showed] off the Boat.

"Was at Compton's office about 4 hrs for a lot of Hot air.

"Made a ferry trip on Ithaca."

In 2017 the Binghamton, which sank at the dock years after being converted to a restaurant, was demolished. You can read more here and here.

Our latest Ocracoke Newsletter is a history of Village Craftsmen (1970 - the Present). You can read the Newsletter here: https://www.villagecraftsmen.com/history-village-craftsmen-ocracoke-island/.
Posted by Philip at 5:36 AM