On this date in 1856 the bark* Mary Varney wrecked and broke apart off shore of Hatteras Island. Although one sailor lost his life in the disaster, legend has it that another crew member made it to shore in an unusual fashion, and never left. 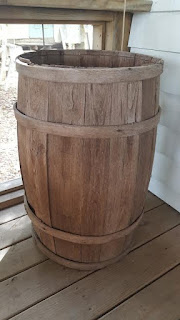 * A bark is a sailing ship of three or more masts with the aftmost mast fore-and-aft rigged and the others square-rigged.

Our latest Ocracoke Newsletter is a history of Village Craftsmen (1970 - the Present). You can read the Newsletter here: https://www.villagecraftsmen.com/history-village-craftsmen-ocracoke-island/.
Posted by Philip at 6:03 AM