Ocracoke Village comprises little more than 600 acres of buildable land, and about 950 residents. In spite of the small and circumscribed land mass and the tiny population, Ocracoke is home to more than eighty cemeteries. With only a few exceptions, the cemeteries are small and mostly serve individual families. Scattered throughout the village, most are located near historic home sites, and are generally enclosed by simple wooden fences. Many are clearly visible from village roads. One of the largest, the George Howard cemetery, contains about four dozen marked graves. 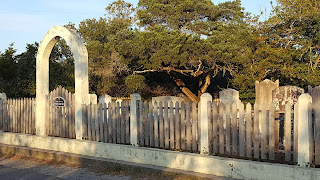 The George Howard cemetery is not far from the British Cemetery, the final resting place of four sailors whose armed trawler was torpedoed offshore during World War II. The oldest grave in the Howard cemetery is that of George Howard, son of William Howard, Sr., the island’s last colonial owner. George Howard died in 1806, and virtually everyone buried there is a descendant of his. More recent graves date into the twenty-first century. 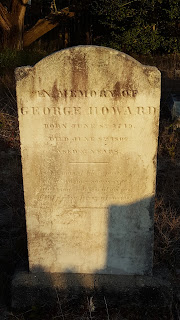 This month's Ocracoke Newsletter is the story of Ocracoke Lodge No. 194, Independent Order of Odd Fellows. You can read the Newsletter here: https://www.villagecraftsmen.com/island-inn-lodge-no-194-independent-order-odd-fellows/.
Posted by Philip at 5:43 AM