First-time visitors to Ocracoke may notice this road sign near the National Park Service Visitors Center, and wonder what it means: 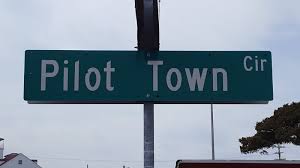 Island historian, Earl O'Neal (), explained in 1998 that "[s]everal maps between 1826 and 1830 show the Village of Ocracoke with the name Pilot Town. As early as 1743 there was a settlement on Ocracoke called Pilot Town, which was named that because the only settlers were pilots, who were squatters, not owning the land they lived on."

Pilot Town is believed to have been located at Springer's Point. Ship pilots guided vessels safely through the inlet, and into the deeper waters of Pamlico Sound. They were an important factor in the commercial vitality of the colony (and later, state) of North Carolina.

Our latest Ocracoke Newsletter is a history of Village Craftsmen (1970 - the Present). You can read the Newsletter here: https://www.villagecraftsmen.com/history-village-craftsmen-ocracoke-island/.
Posted by Philip at 5:38 AM