Israel Hands, also known as Basilica Hands, was an 18th-century pirate best known for being second in command to Ocracoke's most famous pirate Edward Teach (Blackbeard). 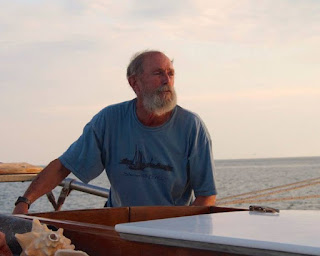 In case you've never heard him recite it, the Captain gave me permission to publish it below. And for more information about sailing with Captain Rob on the Windfall II, click here.


I was strolling the lane through Hyde Park in foggy London town
when the cries of a beggar distracted me and caused me to turn around.
Approaching me from out of the mist was a shabbily clad old soul
hobbling along on a wooden leg with the help of a wooden pole.

From his deeps set eyes and leathery skin
it was instantly clear to me
that the guy was a tar who had journeyed from a far
and spent most of his life on the sea.

“You look like a sailor,” I said to the man,
“and form that ring in your ear
I'm rather inclined to understand you were once a buccaneer.”

“Right you be Governor,” he said with glee.
“And honestly have no regrets,
for the life of a pirate for a poor chap like me
is about as good as it gets.


Put a coin in me cup and drop anchor awhile
and I'll enlighten you how matter stands.”
Then he squared his shoulders and doffing his hat said ,
“My name be Israel Hands.”

We both took a seat on a nearby bench
and I readily gave him a tuppence,
which was all that was required to get him inspired
to tell of a pirate's comeuppance.

“Ye might not believe it to look at me now
all crippled and cast on the beach.
But in better days,”he said with a bow,
“sailed with Edward Teach.

Yes old Blackbeard was admired and feared by all who ever heard of him
Well if not admired then envied at least by all who ever go word of him.
He'd braid his beard up with ribbons and bows and tuck slow matches under his hat
and swinging his cutlass with powerful blows he would charge into battle like that.

I sailed with Teach in the Queen Anne's war when we was a privateering
and after that war come to an end we took up buccaneerin'.
We took the Concorde from the frogs and renamed her Queen Anne's Revenge.
Fitted her out with 40 guns and commenced a piratical binge.

I see you admiring my silver cuffs
a souvenir of our very first prize
we robbed the old Alan and burned her up
and Teach stole this, curse his eyes.
We thought he'd gone daft when he fought the Scarbourough
British man-o-war.
But when she turned and fled,
he just laughed and said
'Thats what them guns was for.'

Then for awhile we all lived in high style
at our base in the central Bahamas.
With good rum and wine and living was fine
attended by dark skinned mommas.

But Blackbeard grew bored and he took us to sea
where we constantly pillaged and plundered.
and ships always surrendered and none dared try to flee
whenever our 40 guns thundered.

But one day Blackbeard began to complain
expressing a grave disappointment.
He was plagued with a cursed unmentionable pain
and in need of mercurial ointment.

His composure had come all adrift
and in anguish we heard him cry
that one of the lasses had left him a gift,
a thing to remember her by.

So he set sail for Charleston in South Carolina
in search of a medicine chest.
Blockaded the harbor for 8 or 10 days
while our patience was put to the test.
Then our mission completed we set sail again
as our captain recovered his health.

He was thinking by now he had too many men
for properly splitting the wealth.
So we ran her ashore in the pretense of cleaning the bottom.
Then we scuttled the vessel and most of the crew
and left them all there and forgot them.

Now in the small sloop Adventure
we stowed all the treasure
and headed her north up the coast.
and I served first mate at the captains pleasure,
I could navigate better than most.

It Ocracoke we entered the sound
We all knew where Teach was leading.
Up Pamlico river in old Bath town we surrendered to Governor Eden.
For the King hath a pardon for penitent pirates.
He called it the Act of Grace.
So Teach bought a house there and married a wife
and settled right into the place.

But soon we grew restless including old Teach
and we longed for a life on the sea.
No pirate likes to be stuck on the beach.
We pirates we need to be free.

So each got us cleared for a trading voyage
way down St. Thomas way
and as soon as our sloop was way out to sea
a course to the northward we lay.

When we reached Philadelphia, we come by the news
they was plotting to throw us in jail.
Well that don't sit well with pirate crews,
so we returned to our sloop and set sail.

Then out by Bermuda we come by two ships
both flying the flag of old France
So out with our Jolly Roger we rips
and we scared them right out of their pants.
On one of them ships there was nothing worth stealing
but the other had sugar and such.
So Teach put all them frogs on the ship less appealing
and we cast them away without much.

Then returning to Bathe with his hefty new prize,
Teach claimed that we found her adrift.
And Governor eden, believing his lies
to Blackbeard he made her a gift

After selling the cargo
Blackbeard declared her to be a leaky old clunker.
So with Eden's approval
we towed her out well into the river and sunk her.

The success of our venture inspired us all with the need of a celebration.
So on Ocracoke we greeted the fall with some festive recreation.
when Charles Vane and Jack Rackham sailed into the sound with their ships in full regalia,
the rum and the good cheer was shared all around in a pirate saturnalia.

Never before never since on the mainland of American shore
was so many pirates pitching their tents with music and drinking galore.
But the news of our party had a troubling effect on the local respectable folk
and the rumor soon spread that we planned to erect a fort there on Ocracoke. .

Since Governor Eden was Blackbeard's friend
they expected no help to come forth.
So the gentry they decided to send a request for aid from the north.

Well Virginia's Governor Spotswood had some trouble of his own
his council suspected he was up to no good
from some shady dealing he'd done.
So to make a hero of himself he financed a large attack
on North Carolina to exterminate Teach
or capture him, bring him back.

It was about this time I was down below a drinkin' with Teach on our ship
when all of a sudden he blows out the light, takes a pistol into his grip
Before I could focus my vision right, he fires it under the table
and the ball it tore my kneecap off and I cursed him for all I was able.

They took me to Bath to the sawbones house and there they put me ashore
and I pilfered this cup from Blackbeard the louse
and I never saw him no more.
The doctor there cut off my leg.
Weren't nothing else he could do
and to my stump he attaches this peg
and my dancin' days was all through.

But blow me down!
it was all for the best things turned out like they done.
For otherwise I'd a been killed with the rest
or tried in Virginia and hung.

For it was soon after that Teach fought his last fight
and go this head cut off from his neck.
And them that weren't killed
all took on a great fright
and surrendered right there on the deck.

Then lieutenant Maynard of His Majesty's ship
Brought his sloop up to bath for awhile
and he rounded us up
to make the long trip up back to Virginia for trial.
And the rest was all hanged cept for Samuel O'dell
who'd been taken there by mistake.

And I thought for sure I'd soon be in hell
but I got a miraculous break.
For as they was fitting that noose round my neck
in the royal courthouse garden
a ship hove in sight and they cried from the deck
that the King had extended his pardon.

Well that very same ship she brought me back home
here to London to spend my existence.
Well here on the streets is a beggar I roam,
exchanging my tales for subsistence.”

As he finished his tale he looked rather pale
so I drew out a flask from my cloak.
And pressing it into his hand so frail
I offered a drink to the bloke.

He uncorked the bottle and held it aloft
his face as gray as a ghost.
And in a voice both earnest and soft
he gave me the following toast:

“May your whistle stay wet.
May your powder stay dry.
May you keep all your parts when life's cannonballs fly.

With the treasure of friendship may your ship be supplied.
May you journey and carry afar
May fortune and happiness sail by your side
and sustain you wherever you rrrrrrrrrr.”

If you have ever wondered how the street you live on or vacation on got its name, or are just curious about other street names, take a look at this month's Ocracoke Newsletter. We have compiled a list of every official street in Ocracoke village, along with one or more paragraphs explaining how they came to be named. You can read the Newsletter here.
Posted by Philip at 6:00 AM