The Civil War on the Outer Banks

Visitors to Ocracoke often ask about the American Civil War and how it impacted Ocracoke. Although Union forces invaded Ocracoke early in the war (they had already seized control of Hatteras Inlet), there were no military engagements on the island because there were no cannons or fortifications on Ocracoke. The fort on nearby Beacon Island, which had never been completed, was abandoned by Confederate troops before Union forces arrived.

Nevertheless, the Outer Banks played a significant role in the early years of the War. Fred Mallison has written an excellent book about the Civil War based on official records, contemporary newspaper accounts, personal journals of the soldiers, and many unpublished manuscripts and memoirs. It is titled, The Civil War on the Outer Banks A History of the Late Rebellion Along the Coast of North Carolina From Carteret to Currituck. 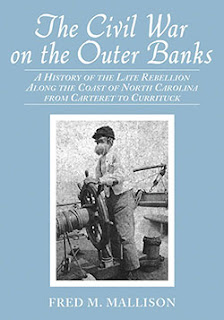 A description of the book explains that "the ports at Beaufort, Wilmington, New Bern and Ocracoke, part of the Outer Banks (a chain of barrier islands that sweeps down the North Carolina coast from the Virginia Capes to Oregon Inlet), were early involved in the chaos that grew into the Civil War. Though smaller than their counterparts in South Carolina, the small river ports were useful for the import of war material and the export of cash producing crops, through their use of the inlets that led from sounds to sea."

This month's Ocracoke Newsletter is the story of Mrs. Godfrey's ghost who haunts the Island Inn/Odd Fellows Lodge. The story is taken from Chapter Three of my book, Digging up Uncle Evans. You can read the account here: https://www.villagecraftsmen.com/mrs-godfreys-ghost/.
Posted by Philip at 5:46 AM