Probably the most fondly remembered mailboat to connect Ocracoke with the mainland was the Aleta which served from 1930 to 1952. I have written about this vessel several times (click here to access other blog posts about the Aleta).

However, there were other diesel-powered mailboats in the early twentieth century: the Kitty Watts, the Meteor, the Hero, the Viola, the Lillian, and the Ripple. In the nineteenth century and before, bugeye sailing vessels brought mail and freight to Ocracoke.

In 1953, after the owners of the Aleta lost the mail contract, Ansley O'Neal, captain of the Dolphin, began bringing mail to the island. 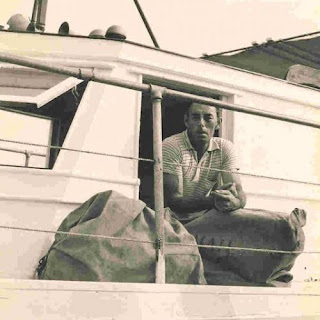 This lasted until 1964, after which all mail to Ocracoke was brought by truck. Carl Goerch, in his 1956 book, Ocracoke, describes coming to Ocracoke on the Dolphin:

"[The Dolphin, captained by Ansley O'Neal, is] about forty-five feet in length....

During the summer months the mail boat will carry as many as thirty-five passengers. At other times there may be only four or five aboard.

In addition to mail and passengers, the boat also hauls considerable freight. This is stowed away in the hold and on deck.

There are benches on which you can sit with a fair degree of comfort. If the boat is crowded, you can find a resting place on an empty fish box or take your seat on some of the packages of freight. If it starts raining, everybody tries to get down in the cabin  Those who are unsuccessful in doing this cheerfully remain on deck and get soaked.

There's usually an awning over the afterdeck. If you can't get under the awning you stand a fine chance of getting one of the best sunburns you've ever had.

Doesn't sound particularly appealing, does it? However, I don't believe I've ever heard of anybody complaining. Everybody seems to enjoy the trip."

If you have ever wondered how the street you live on or vacation on got its name, or are just curious about other street names, take a look at this month's Ocracoke Newsletter. We have compiled a list of every official street in Ocracoke village, along with one or more paragraphs explaining how they came to be named. You can read the Newsletter here.