I know I've mentioned this before, but this morning I share an interesting bit of Ocracoke island trivia. Whelks and conchs come in both right-handed & left-handed versions, depending on which side the opening is on.

If you look at this knobbed whelk in any shell book (the photo below is from Wikipedia), it will be identified as a right-handed shell, by far the most common configuration. 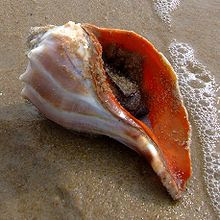 Ocracokers, on the other hand (pun intended!) will call this a left-handed whelk.

The reason? In the days before our municipal water system (which was constructed in the mid 1970s) all drinking water on the island was collected from rain water in cisterns. In addition to a hand pump attached to the cistern, most islanders kept two shells nearby, one right-handed, and one left-handed. As you can see from the photo above, this shell would serve beautifully as a dipper for a left-handed person. Hence, it was identified as a left-handed whelk.

Our latest Ocracoke Newsletter is another tribute to the memory of islander and independent spirit Don Wood. You can read it here: http://www.villagecraftsmen.com/news062110.htm.
Posted by Philip at 7:03 AM