A year and a half ago I published a blog post about WWII landing mats that were used on Ocracoke. Below is a photo I took last month. This twisted piece of rusty metal may not look like much, but it is actually something of an historic artifact. 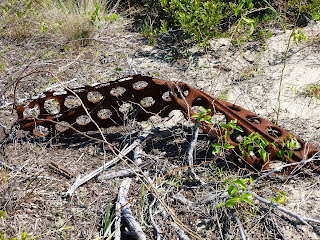 These Marsden Mats were originally developed by the US military during WWII for use as temporary runways and landing strips. Approximately 2 million tons of this material was produced, at a cost of about $200 million.

After the war these landing mats were laid down on island soft sand to serve as roads. In 1957 a three mile section of landing mats at the north end of the island joined the nearly completed hard surface road (NC12) that, for the first time, connected Ocracoke village to Hatteras Inlet.

I will include a few photos of the remains of these buildings in a future post.

Our current Ocracoke Newsletter is an account of Infant & Childhood Mortality on Ocracoke. You can read it here: http://www.villagecraftsmen.com/news072113.htm.
Posted by Philip at 5:49 AM