Long time visitors to the island, Art & Elizabeth, recently sent me a few photos from their 1981 Ocracoke Island wedding. Edgar Howard played the banjo. They sent me this picture of Edgar sitting in front of their tent-camper. 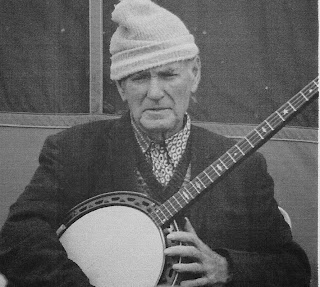 Edgar was born on the island in 1904. He died in 1990. Edgar's son, Ronnie Howard, started Howard's Pub. Edgar was an accomplished banjo player. Along with his brother Walter, who played guitar, they performed on stage in New York City and elsewhere in the 1920s and 1930s, often with stars such as Gene Autry, Al Jolson, and Cary Grant.

Look for an Ocracoke Newsletter about Edgar & Walter's jug band, The Five Harmaniacs, sometime this winter.

Our most recent Ocracoke Newsletter is a compilation of humorous stories told by or about islanders. You can read it here: http://www.villagecraftsmen.com/news092113.htm.
Posted by Philip at 5:56 AM