Yesterday I published a photo of Edgar Howard, celebrated island musician of the early 20th century. This is a picture of his tombstone that I mentioned. 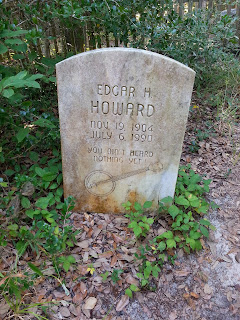 Edgar is buried on Howard Street, across from Village Craftsmen. His grave is just inside the white picket fence, near the single gate. Edgar was not only an accomplished musician...he was an island character missed by all who knew him.

Tomorrow look for links to some of his music.

Our most recent Ocracoke Newsletter is a compilation of humorous stories told by or about islanders. You can read it here: http://www.villagecraftsmen.com/news092113.htm.
Posted by Philip at 5:26 AM