A marker commemorating Beacon Island and Fort Ocracoke, a Civil War fort in Ocracoke Inlet, is located near the NPS Visitors Center, not far from Pamlico Sound. 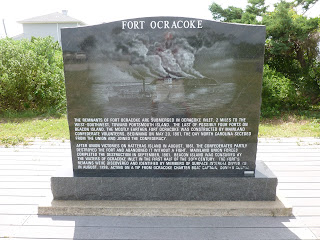 "The remnants of Fort Ocracoke are submerged in Ocracoke Inlet, 2 miles to the west-southwest. toward Portsmouth Island. The last of possibly four forts on Beacon Island, the mostly earthen Fort Ocracoke was constructed by mainland confederate volunteers, beginning on may 20, 1861, the day North Carolina seceded from the union and joined the confederacy.

"After union victories on Hatteras Island in August, 1861, the confederates partly destroyed the fort and abandoned it without a fight. Mainland union forces completed the destruction in September, 1861. Beacon Island was consumed by the waters of Ocracoke Inlet in the first half of the 20th century. The fort's remains were discovered and identified by members of Surface Interval Diving in August, 1998, acting on a tip from Ocracoke charter boat captain, Donald Austin."

On the other side of the marker are lists veterans from Ocracoke & Portsmouth who served in the Confederate and the Union armies. 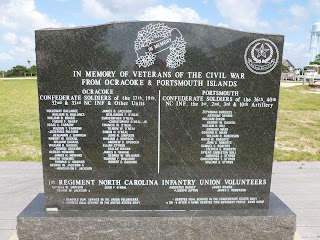 Our most recent Ocracoke Newsletter is a compilation of humorous stories told by or about islanders. You can read it here: http://www.villagecraftsmen.com/news092113.htm.
Posted by Philip at 5:16 AM