In the mid-1950s Ken Burke made his first visit to the Outer Banks. He was a sophomore at the University of Richmond, and was on semester break. He and a buddy got their car stuck in the sand "just below Virginia Beach" and had to be pulled out by a Coast Guard bulldozer. At Oregon Inlet they slept on the ground (it was sleeting), waiting for the ferry next morning.

Not until the next year did Ken and his friend venture all the way to Ocracoke. Highway 12 had not yet been built on Ocracoke, so they planned to walk from Hatteras Inlet to the village. Fortunately, a Coast Guardsman offered them a ride in his 4-wheel-drive vehicle. Ken relates that, "Interestingly enough, as we went down the beach, there were cattle actually standing in the surf. Not ponies, but cattle."

A fall storm ("coming out of the southwest") forced them to find shelter in the "old USA Navy concrete lookout tower for submarines [see photo below]." 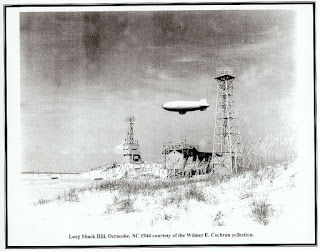 The next day they walked into Ocracoke Village.

But Ken had heard about Portsmouth Island, and he was determined to get there. In April of 1957 he and two more friends returned to Ocracoke. They booked passage on the mailboat Aleta, and were met in the channel by Tom Bragg who introduced them to Portsmouth.  They spent three days, the beginning of his love affair with that most isolated Outer Banks village.

(The above information comes from an interview conducted by James White, and printed in the Summer, 2015 issue of Doctor's Creek Journal, published by The Friends of Portsmouth Island.)

You can read Ken Burke's 1958 Honors Thesis,  "The history of Portsmouth, North Carolina, from its founding in 1753 to its evacuation in the face of federal forces in 1861," here: http://scholarship.richmond.edu/cgi/viewcontent.cgi?article=1410&context=honors-theses.

This month's Ocracoke Newsletter is the story of whale and porpoise fishing on  the Outer Banks. You can read the story here: http://www.villagecraftsmen.com/news082115.htm.
Posted by Philip at 5:24 AM