For fifty years I have kept a copy of Mutiny on the Bounty on my book shelf...but never read it. A few days ago I spied the entire trilogy (Mutiny on the Bounty, Men Against the Sea, and Pitcairn's Island), and decided I must read these classics. The pages are yellow and brittle, but the books are wonderfully written.

In chapter IV ("Tyranny") of Mutiny on the Bounty I came across this paragraph: "We had supped and were passing the time at Ablewhackets—a game I have never seen played ashore. It is commenced by playing cards, which must be named the Good Books. The table is termed the Board of Green Cloth, the hand the Flipper; the light the Glim, and so on. To call a table a table, or a card a card, brings an instant cry of "Watch," whereupon the delinquent must extend his Flipper to be severely firked [beaten or struck] with a stocking full of sand by each of the players in turn, who repeat his offense while firking him. Should the pain bring an oath to his lips, as is more than likely, there is another cry of "Watch," and he undergoes a second round of firking by all hands. As will be perceived, the game is a noisy one." 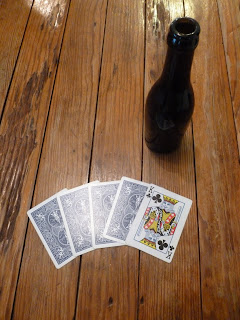 I had never heard of Ablewhackets, but imagined my ancestors playing the game aboard sailing ships. I wondered what the rules of the card game were. I discovered several descriptions of the procedures, but no explanations of the game itself.

"ABLE-WACKETS. blows given on the palm of the hand with a twisted handkerchief, instead of a ferula [a flat ruler with a widened end, formerly used for punishing children]; a jocular punishment among seamen, who sometimes play at cards for wackets, the loser suffering as many strokes as he has lost games." (From the 1811 Dictionary of the Vulgar Tongue by Capt. Grose).

"Able-whackets. A popular sea-game with cards, wherein the loser is beaten over the palms of the hands with a handkerchief tightly twisted like a rope. Very popular with horny-fisted salts." (From The Sailor’s Word-Book, by William Henry Smyth, 1867.)

This is what I learned from http://www.worldwidewords.org/weirdwords/ww-abe3.htm: "None of the many descriptions explain the card game itself. Though it was clearly of secondary importance in the gulling of the unwary, it must have had some rules, but we’re never told what they were."

I have come to believe that ablewhackets could be played with many different card games. Perhaps innovative versions were created regularly as sailors whiled away long hours at sea.


Stephen Brennan relates this story ("Davy Jones's Gift" by John Masefield) in his 2011 book, The Best Sailing Stories Ever Told:

"And each of them had a hand of cards, and a length of knotted rope-yarn, and they were playing able-whackets. Each man in turn put down a card, and swore a new blasphemy, and if his swear didn’t come as he played the card, then all the others hit him with their teasers."

I suppose this is more than any of our readers wanted to know about ablewhackets (the name probably derives from "able-bodied seaman" [a rank in the merchant marines] and "whack" [to strike forcefully with a sharp blow]), but it is an entertaining glimpse into nautical history.


This month's Ocracoke Newsletter is the story of whale and porpoise fishing on the Outer Banks. You can read it here: http://www.villagecraftsmen.com/news082115.htm.
Posted by Philip at 6:23 AM