What Was I Thinking?

I met Katie & Kendall after our Ghost & History Walk two weeks ago. Katie's s great-great grandfather, William Toler (born 1830) had lived on Ocracoke. He was lost at sea in 1888. A grave marker was erected in the family cemetery. His daughter, Lettie, married a man from Swan Quarter, and the family soon moved off the island.

Katie and her daughter Kendall, who live in Currituck, NC, asked me if I knew where William Toler's grave was. After a bit of research I felt sure I knew where he was buried. I'd been there before. "It is back in the woods, far from the paved road," I told them, "but if you would like to see it, I will take you there." They readily agreed, and we met the next morning at 9 am.

The path to the graveyard was much more overgrown than the last time I had been there. There was hardly even a path. We stepped off the pavement, and almost immediately found ourselves chest deep in thick marsh grasses. Soon enough the path disappeared completely, and we entered a dense thicket of myrtles, vines, thorns, and other vegetation. Our way was repeatedly blocked by fallen trees, heavy, low-hanging branches, and lush patches of poison ivy. Eventually we stumbled upon a timy Scarborough family cemetery. There was no fence, just a few stone markers in what was once a small clearing. This was not the graveyard we were looking for.

I almost despaired of ever again finding William Toler's grave, but I persevered. Pushing through more tangles of vines and thorns, I made several false starts, only to find my way blocked. Finally I made a bit of headway, and spied a short portion of an old wooden fence. Other sections had rotted away at the base, and had fallen on the ground. Nearby were several stone markers. This was what we were seeking. I called back to Katy and Kendall who were making slower progress.

Gingerly stepping over roots, dead branches, sharp thorns, and poison ivy, the two women entered the graveyard. William Toler's gravestone was on the edge of a dense thicket, and badly weathered. We took a couple of photos since Katy & Kendall doubted they would ever venture back there again. 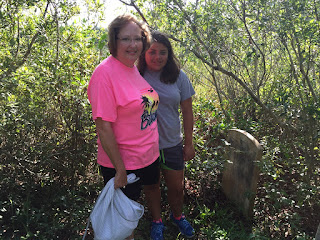 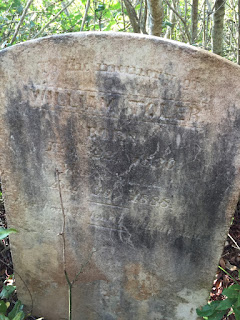 We couldn't find the same way back out to our car, so we struggled through more underbrush, thorns, wet bogs, tall grass, and thick vines. In spite of the difficulties, Katy and Kendall thanked me for leading them to their ancestor's gravestone (we didn't mention snakes or ticks until we were back to the pavement!). Katy and Kendall will return home with stories of an adventure And they visited a part of Ocracoke seldom seen by visitors or even residents.

Back home I wiped the dozens of scratches on my legs with rubbing alcohol, showered thoroughly to wash away the dirt, grime, and poison ivy oils, then re-treated my wounded legs with more rubbing alcohol. Next time I plan to wear blue jeans!

This month's Ocracoke Newsletter tells the delightful story of the 19th century "Stovepipe Hat" wreck. It has been told for years in books & magazines, but it probably never happened. You can read the story (and my research) here: http://www.villagecraftsmen.com/news072115.htm.
Posted by Philip at 5:50 AM