Cousin Dallie stopped by Friday morning with a small critter in a jar. 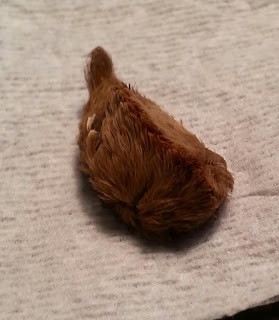 It turns out this is the larva of the moth Megalopyge opercular, and is considered the most venomous caterpillar in the US. This cute little thing, called a Puss Caterpillar, had just stung Dallie several times. (No need to worry; Dallie went to the clinic, was treated, and "only" suffered rash & stinging.)

This is what Wikipedia has to say about this caterpillar: "The inch-long larva is generously coated in long, luxuriant hair-like setae, making it resemble a tiny Persian cat, the characteristic that presumably gave it the name 'puss.' It is variable in color, from downy grayish-white to golden-brown to dark charcoal gray. It often has a streak of bright orange running longitudinally.

"The 'fur' on early-stage larvae is sometimes extremely curly, giving the larva a cottony, puffed-up look. The body tapers to a tail that extends well beyond the body, unlike its relative M. crispata. The middle instar has a more dishevelled [sic], 'bad-hair-day' appearance, without a distinctive tail. The 'fur' of the larva contains venomous spines that cause extremely painful reactions in human skin upon contact. The reactions are sometimes localized to the affected area but are often very severe, radiating up a limb and causing burning, swelling, nausea, headache, abdominal distress, rashes, blisters, and sometimes chest pain, numbness, or difficulty breathing. Additionally, it is not unusual to find sweating from the welts or hives at the site of the sting. Ironically, the resemblance of the larvae to soft, colorful cotton balls encourages people to pick them up and pet them."

You have been warned. Beware of the Puss Caterpillar. They can be found throughout the South, and now we know they reside on Ocracoke.

This month's Ocracoke Newsletter tells the delightful story of the 19th century "Stovepipe Hat" wreck. It has been told for years in books & magazines, but it probably never happened. You can read the story (and my research) here: http://www.villagecraftsmen.com/news072115.htm.
Posted by Philip at 5:58 AM