A hand-made wooden cross rests on the altar in the sanctuary of the Ocracoke Methodist Church.  The cross was constructed by Homer Howard, and painted gold by his wife, Aliph.  The cross was made out of salvage from the ship on which island native, James Baughm Gaskill (1919-1942), served and lost his life. The cross stands today as a memorial to James Baughm Gaskill, 3rd mate in the  USS Maritime service. 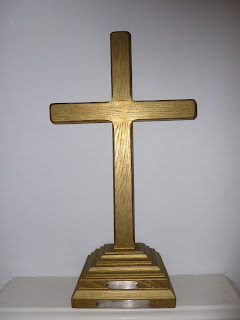 Jim Baughm's ship, the Caribsea, was torpedoed and sunk off shore by a German U-boat on March 11, 1942.  Shortly after the sinking, Christopher Farrow, James Baughm's cousin, found his  framed license cast up on the ocean beach. Later, the ship's nameplate and other debris washed up at his family's dock, at the old Pamlico Inn.

Although Jim Baughm was lost at sea, and his body never recovered, his family erected a marker in the family cemetery behind the lighthouse. 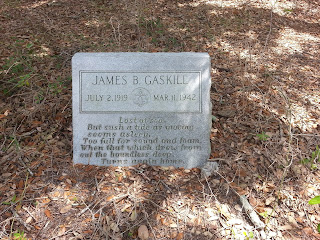 The epitaph is a quotation from Alfred Lord Tennyson's poem, "Crossing the Bar."

But such a tide as moving seems asleep,
Too full for sound and foam,
When that which drew from out the boundless deep,
Turns again home.

This month's Ocracoke Newsletter is the story of whale and porpoise fishing on  the Outer Banks. You can read the story here: http://www.villagecraftsmen.com/news082115.htm.
Posted by Philip at 5:34 AM